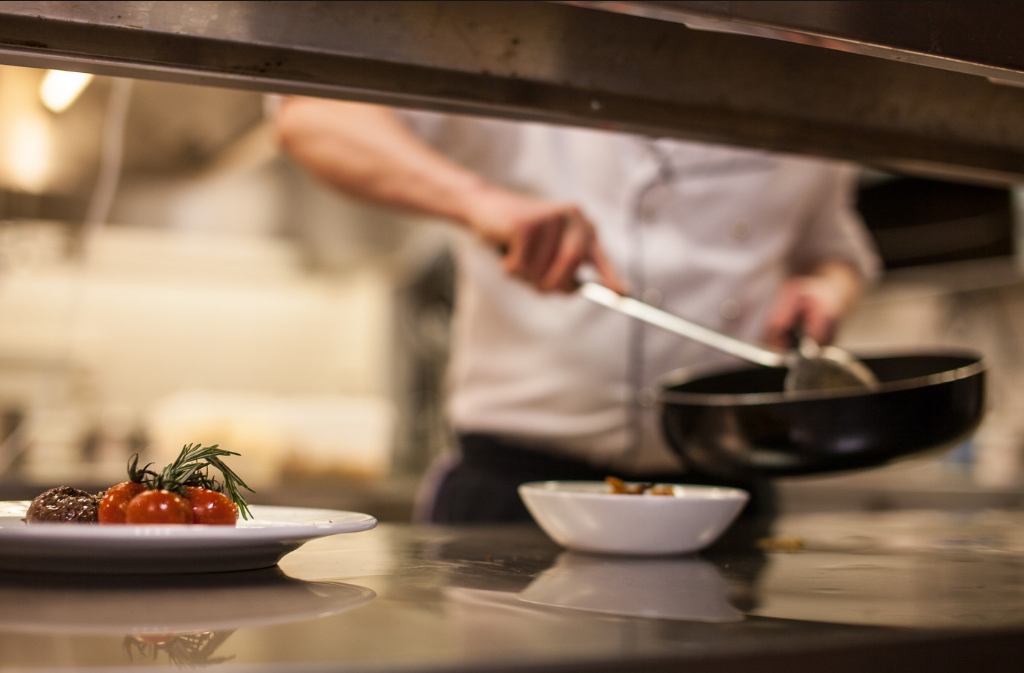 Eating and cooking at home is always preferable, but sometimes that’s not realistic, or even desirable. Whether for work or social reasons, we all love the experience of going out for a nice meal. However, if you don’t want to be “that person” who orders a plate of raw veggies at a pasta joint, but you do want to minimize the dietary damage, here are the healthiest choices likely to be available at five different types of restaurants.

1. Italian: Let’s start with appetizers. Any salads that have vinaigrette or other oil-based dressings are much better than the cream-based dressings.That being said: always start with a salad! This way you can fill up on plenty of vegetables before gorging on the other stuff. If you don’t want salad, roasted or grilled vegetables are another option, or even carpaccio (thin-sliced raw meat), which is very lean. Minestrone soup is also a good option. At that point you should be feeling pretty satisfied before you’ve even looked at the entrées, which is a big plus.

Among the entrées, grilled chicken breast or fish are fine as long as there’s no breading on them, so be sure to ask before you order or look for terms like “crispy,” “crunchy” or “fried”. For pasta, stick with the tomato-based sauces to be sensible with calories rather than creamy sauces (sorry, this means alfredo!). Finally and most importantly, watch the portion sizes! Italian restaurants are notorious for their generous servings, which is great for your wallet, not so much for your belly. To help with this, ask for a to go box before your food comes. Then you can put half in the box for lunch the next day. Not only that, the food is out of sight and you won’t be tempted to eat it all in one sitting — just the portion in front of you.

2. Mexican: People always think this one’s the worst, but actually, it’s the safest, because Mexican cuisine has many fresh, grilled choices. The problem comes with the cheese, avocado, sour cream, deep fried options. However, they’re called options for a reason, so opt out of them if you’re watching your calories. You might start with a ceviche as an appetizer (that’s fish cured with a little citric acid). Chicken tortilla soup is also a healthy option. Or, try a Santa Fe salad: corn, black beans, tomatoes, and lettuce. This often comes on a tortilla shell, but ask them to hold the shell if you think you will tempted to eat it. I don’t believe in will power, so I think it’s better not to be tempted. Knowledge won’t always stop us, so better not to have it around. If you don’t think you can resist eating something that’s an ingredient in the food, ask the kitchen to leave it out.

For the entrées, a burrito is a workable alternative as long as you remember that the tortilla is the grain. So just get chicken, pico de gallo, lettuce and the tortilla. Or, just rice, beans, and the tortilla. Even better, request your burrito naked with all of your ingredients in a bowl instead. That way you can ax the tortilla calories altogether and have more of the filling. Corn tortilla tacos with grilled chicken or fish will also be delicious if you add a salsa, such as a pico de gallo or a salsa verde, instead of sour cream and guacamole. Salsa keeps the food moist in place of the sour cream or cheese and adds more flavor with minimal calories to contribute.

3. Indian: This one is a little more difficult as many dishes in this cuisine are made with coconut milk, butter and heavy cream which are all high in saturated fat. However, you can have Dal (lentil soup) for an appetizer, raita (a blend of yogurt and cold veggies) and salads with vinaigrette on the side to help fill you up. For your entrée, dishes from the tandoori portion of the menu are a fairly safe choice due to the fact that they are usually grilled. You can also try a version of vegetables masala—chickpea masala, for instance. Try to steer clear of curries if possible, as these are usually made with large amounts of coconut milk and butter.

4. Thai: Thai restaurants offer some delicious and relatively healthy options. Among the appetizers, try the fresh salad spring rolls. The satays are also a lean option, whether chicken, beef, or pork. Like Indian cuisine, look out also for soups that are made without coconut milk. You may also find a green papaya salad on the menu. For entrées, Thai offers grilled chicken, fish and shrimp. The stir frys are a workable option as well, so long as there is no breading or deep-frying. However, this  is not ordinary in Thai cuisine. So long as the meat is plain and comes with lots of veggies, it’s a good option. Finally, opt for brown rice as the accompaniment.

5. Chinese/Japanese: I realize these are very different cuisines, but the fact is, Chinese food can be pretty dangerous in the forms prepared in most American restaurants. So you may want to go in another direction altogether and head out for Japanese instead. If you are committed to Chinese, the safest appetizers are the soups: wonton or hot and sour. Steamed dumplings (rather than fried) are also okay. Among the entrées, Mu shu chicken or pork is relatively low in fat along with the chicken or beef stir fry, again, as long as it is not battered or deep fried.

So perhaps you could redirect your party to go out for Japanese instead, in which case, there are lots of options: miso soup, sashimi, edamame (soybeans), steamed spinach salad, not to mention the many forms of sushi. Just make sure you choose your rolls wisely and structure your meal mindfully so you don’t end up with a bomb of calories. For entrées, the teriyaki dishes, such as chicken or salmon, are delicious and typically grilled, but watch the sauce and even order it on the side of possible as it can be quite high in sugar. Speaking of sauces, watch that spicy mayo! It’s much wiser for opt for the wasabi, pickled ginger or just plain ol’ soy sauce if you’re needing flavor.