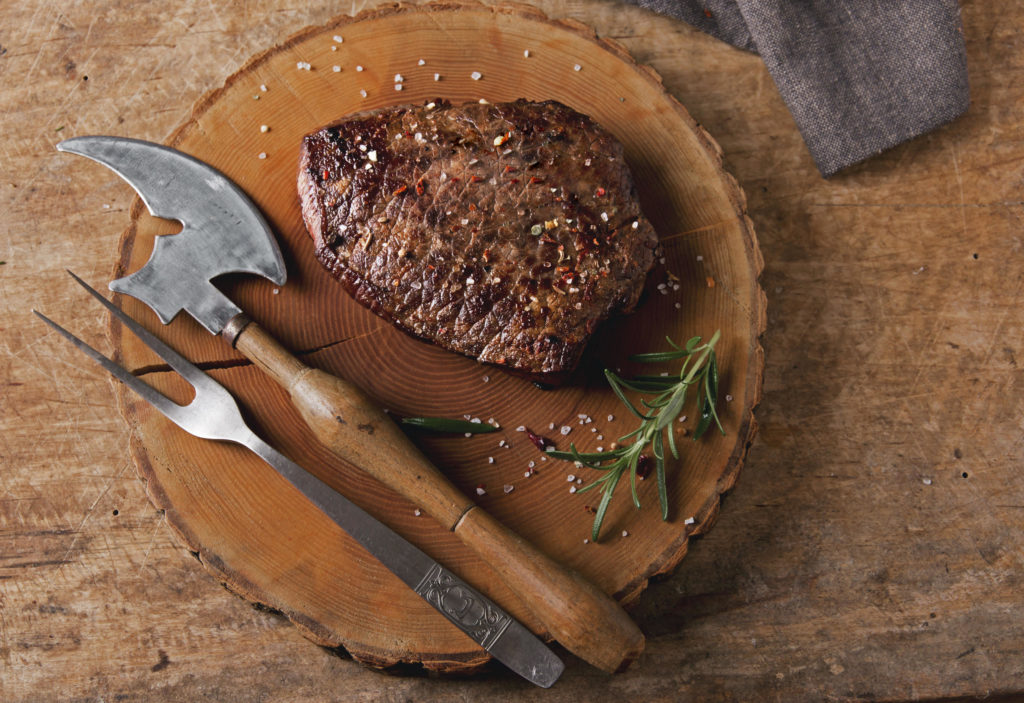 Conventional factory farming and its products have received a lot of attention lately, resulting in some people wanting to abandon meat altogether. For those of us who are standing firm in our carnivorous ways, however, healthier versions of animal protein is also being sought out. Free range eggs, wild-caught salmon and leaner cuts of beef are in higher demand than ever and there’s one version of beef getting a lot of hype: grass fed. However, how much healthier is it than grain-fed beef really? And do the benefits justify the price?

Grain-fed beef costs about $4.95 a pound on average while grass-fed organic beef is about $8.99 a pound. Why the disparity? Well, for one, it can take farmers up to one year longer to raise a grass-fed cow to slaughter weight than a grain-fed cow resulting in way more food and labor cost without nearly as much product to show for it. Also, grass-fed cattle tend to be smaller, so there’s less meat to sell. Since farmers have to pay the same bills no matter how they choose to feed their cattle, the high price of grass-fed makes sense, but is it justified from a nutrition standpoint?

The answer is…kind of, but not by much. Data shows that while grass-fed beef is healthier in some ways, it’s not the glorious gift to the world that some advocates would like to make you believe. Michigan State University conducted a study two years ago, the largest study to date about grass-fed beef, testing 750 samples of commercially available grass-fed beef. What they found was grass-fed beef had less overall fat, more essential omega-3 fatty acids, but a similar concentration of saturated fat to grain-fed beef. Sounds great, right? But let’s break this down a little more.

They found that a kilogram of grass-fed beef provides only 35 mg of EPA and 3 mg of DHA, which are fancy terms for the potent portions of omega-3s. Omega-3s are vital to include in our diets because the body cannot make them on its own, but we need omega-3s for both brain health, heart health and to fight inflammation. However, the amount found in 2 pounds of grass-fed beef is measly when compared to just 3 grams of salmon to get the exact same amount. That’s 332% more beef you would have to eat to get the same amount of omega-3s. That said, authors noted that swapping out 1.5 pounds of red meat from grain-fed to grass-fed has been shown to significantly omega-3 levels in the body. However, the study excluded anyone who ate oily fish more than twice a month. This raises the question: is switching to grass-fed even necessary if all you have to do is eat just one serving of oily fish every week to get the same amount of Omega-3s? We need to look at the big picture here.

The study also looked at concentrations of vitamins and minerals and, on average, amounts were higher than conventional beef, but on a small scale. The differences amounted to about 1 mg iron, 13 mg magnesium, 200 mg potassium, 20 mcg copper, and 0.4 mg of vitamin E. Is this small of an increase worth changing your budget over? That’s for you to decide.

The bottom line? There are plenty of reasons to switch to grass-fed if you’re looking at social factors like the environment and ethics. Also, as you’ve seen, there is science behind grass-fed having more nutrients than grain-fed, but only marginally so. If this small margin is enough to convince you to fork over nearly twice the price per pound for beef, then that’s completely your choice. However, note that if the cut of beef is not lean, you’ll still be getting the same amount of saturated fat regardless of what the cow was chomping on. Also, this falls in line with the organic vs. conventional produce debate. Some people cannot afford produce and meat farmed through organic or traditional practices and sending messages that these are the only “safe and healthful” options will do more harm than good. So, make sure your animal proteins are lean and you are consuming at least 5 ounces of oily fish a week. Not only will you be just as healthy, but twice as rich.