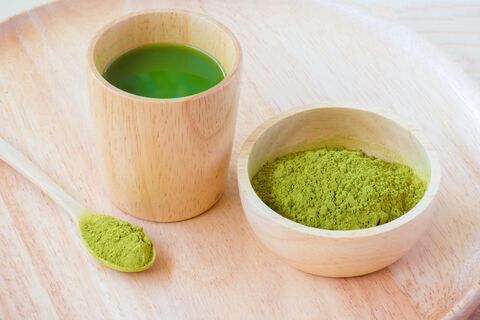 If you’re a regular coffee shop-goer, you’ve likely seen a mysterious new menu item popping up left and right. Well that bright green stuff is matcha, a powdered form of our beloved green tea, and it’s turning up in everything from lattes to ice cream to cupcakes. But what is it exactly? Is it actually as healthy as everyone says? And how does it compare to green tea?

Matcha originates in Japan and was used in tea ceremonies for spiritual and meditative purposes due to the substance’s purported calming effects. Unlike green tea, which harvest consists of simply picking the tea leaves from its bushes, matcha’s production is slightly more complex. The leaves are covered about a month before harvest to block sunlight exposure. This has two effects: 1) It dramatically increases chlorophyll production, giving matcha its vibrant green color and 2) increases production of the amino acid theanine which may have a calming effect on the nervous system. The leaves are then stone ground into the famous powder. So, that stuff you see that’s called “green tea” lattes and ice cream are actually mixtures of matcha.

What are the health benefits?

Since matcha is inherently green tea, just in a more concentrated form, it has the same health benefits of green tea, also in a more concentrated form. Green tea is valued for its content of antioxidants, particularly EGCG, which has a host of health benefits such as helping with heart health and boosting your metabolism and immune system. However, green tea is made by steeping water through, and then discarding, the leaves. Whereas with matcha, the entire leaf is consumed, making it more potent. In fact, recent studies have shown that matcha has three times more EGCG per serving than green tea. Matcha has not been extensively studied on humans just yet, but we DO know that green tea drinkers have a 30% lower chance of developing heart disease as well as preventing obesity.

Are there any drawbacks?

None that we know of so far. However, be warned. The National Cancer Institute says that matcha must be consumed in its pure form in order to reap the health benefits. For example, mixing matcha as an ingredient in lattes and brownies does not deliver the same health benefits due to the dilution of the matcha concentration. Basically, in that form it does not have much to offer other than a neat green color and unique flavor. To truly acquire the full benefits of matcha, the powder is to be whisked in hot water and consumed just like hot tea.

All of that being said, matcha is simply a more concentrated form of green tea, so it is good for you! However, it does not offer any additional health benefits that you cannot obtain from green tea, but a more efficient way of getting them. To elaborate, drinking one cup of matcha would give you the same amount of antioxidants as drinking three cups of green tea.