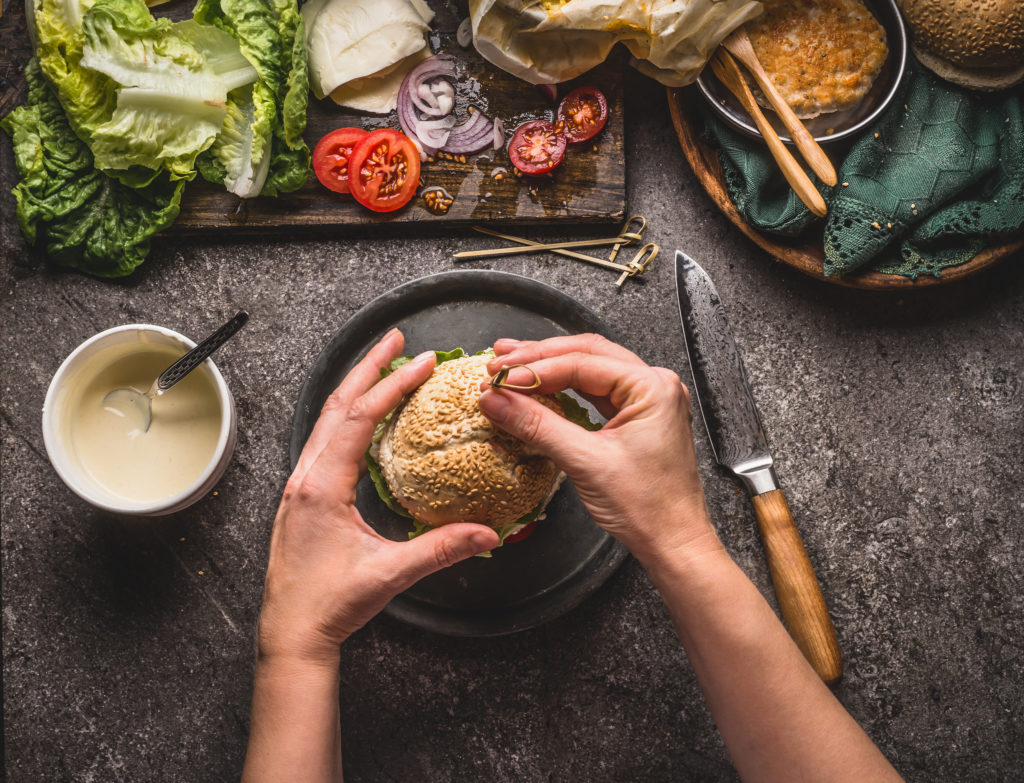 Veggie burgers were just minding their own business, living an idyllic life of glamorous popularity with the surge of vegetarian eating…and then vegan “meat” came along. Plant-based meats are predicted to become a $140 billion industry, with Impossible Foods and Beyond Meat being the biggest moneymakers. According to the CEO of Impossible Foods, “Our hunger for meat is destroying the environment and damaging our health.” They also boast that it delivers the same protein and iron as a burger made from a cow. Now this is great news for vegetarians because these are two nutrients they have the biggest amount of trouble getting enough of. However, are these burgers actually healthier for everyone? Even a better alternative to beef for the more carnivorous? Let’s take a look.

It starts out innocent enough. Specifically, the Impossible Burger is made from “simple plant ingredients that people have been cooking with and eating safely for thousands of years”: potatoes, wheat, soy, and coconuts. So what makes it taste and look so much like actual beef? That, friends, is heme. Without going into too much nutritional science, heme is a form of iron and a molecule in blood that helps all animals carry the oxygen they need to live. Not only does it give meat its meaty and juicy flavor, it’s what causes these plant-based beef patties to look like they’re “bleeding.”

If these burgers are vegetarian-friendly though, how do they get away with adding all of that tasty heme? It’s genetic engineering! They genetically manipulate the roots of soy plants, insert it into a genetically engineered yeast and let it ferment to make even more heme. So, yes, these burgers may be vegan-friendly. However, the consumption of GMOs is a personal preference and, while I see nothing wrong with them, some people choose to avoid them. This means that the heme-making process would make this burger inappropriate for this group. It also happens to be the bread and butter to their biggest selling point — getting these burgers to look and taste like beef.

Have you ever heard anyone tell you if you can’t pronounce most of the things on the ingredient list, it’s probably full of fillers? We’ll let you think on that one. Secondly, this calls into question what people mean by the word “healthy” when referring to this burger. One of the many demonizing factors people cite when they try to convince others not to eat beef and other red meat is because it’s bad for your heart. However, diets high in saturated fat and sodium are major risk factors of heart disease. So when you look at the nutrition facts above and notice that the plant burger has twice as much saturated fat and 6 times as much sodium…which one would you say puts you at a greater risk for heart disease? We’ll let you sit on that question, too.

The bottom line? If you’re a vegetarian or someone who just prefers a more plant-based diet (or just someone who doesn’t want to choke down another dry and bland veggie burger), the impossible burger is a great option for letting you taste the delicious flavors of red meat and still get in some much needed protein and iron. However, if you’re not an herbivore, but leaning toward this option thinking that it’s healthier for you, I can pretty definitively tell you you’re better off just sticking to good old, lean beef.