Whole Grains Are Beyond Brown Rice And Whole Wheat Bread 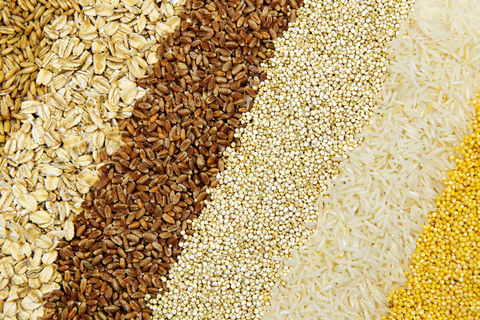 If you think that brown rice or whole wheat bread are the only healthy alternatives options you can eat as a whole grain well think again! Here are five grains that, aside from having high protein content, have vitamins, minerals, fiber, phytochemicals and history.  All have been cultivated for thousands of years.

Quinoa: This is an ancient grain used by the Incas—in fact; it was a staple of their diet. A cup of cooked quinoa has eight grams of protein. It is high in protein, calcium and iron, as well as being a good source of Vitamin E (an anti-oxidant) and several B-vitamins. Quinoa has high lysine, methionine and cystine—the proteins the other plants largely lack. Quinoa is a great grain to combine with any other grain—with beans, or with wheat; it will make the proteins complete.

Farro: An Italian grain, farro sustained the Romans as they conquered the world 7,000 years ago. It also has eight grams of protein per cooked cup. It’s Europe’s quinoa. In addition to protein, farro is an excellent fiber source, with magnesium, zinc and iron.

Barley: Barley is the world’s oldest grain, coming from ancient cities of the Middle East and North Africa. Cultivated for about 8,000 years, it is now the world’s fourth largest cereal crop. Barley beer was probably the first drink developed by neolithic humans. One cup cooked barley has four grams of protein, though it is incomplete, so you will have to mix it with other protein sources during the week. It is considered a whole grain, and is loaded with minerals, vitamins and soluble and insoluble fiber, as well as phytochemicals. It is a very good food.

Amaranth (or kiwicha): Kiwicha is the archaic name for this grain believed by pre-Columbian Aztecs and Incas to have supernatural properties. It was therefore incorporated into their religious ceremonies. “Archaeological records show it first appearing in Mexico in 4,000 BCE so this is a very ancient grain.  Amaranth is higher in protein than most grains, with nine grams per cooked cup. An additional benefit: amaranth is very high in calcium, making it an excellent choice for vegans.

Kasha: This is a cereal commonly eaten in eastern Europe; it is called buckwheat groats in the US. It provides six grams of protein per cooked cup. Kasha is full of B-vitamins, phosphorus, potassium, iron and calcium.. It is also a good source of fiber.

Where can you find these exotic grains? Whole Foods, Trader Joe’s and some major supermarkets carry them, though you may have to go to more than one store if you want to get all of them at once. For those who like food delivered to the front door, Bob’s Red Mill sells all of these grains—and others as well—over the internet.

Once you have the grains in your cupboard, cooking is a simple matter, since all cook about the same amount time with roughly the same amount of water. So, to take care of the mixing question, I recommend putting two or three of the grains together in a rice cooker with water or vegetable broth (see recipe). Cook the grains fully and store a big batch in the fridge to use as the week progresses.

Another idea: cook a large batch of quinoa and keep it in the fridge to mix in with other dishes like adding Quinoa to soups, salads or even your omelets..Over all, explore new things! It is always good to change your diet, and cooking your own is the best plan.