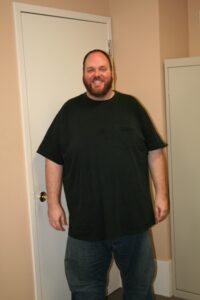 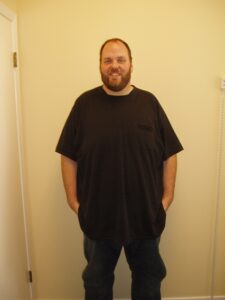 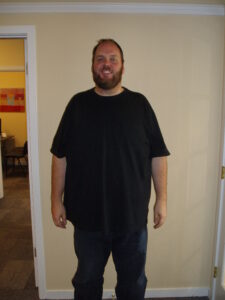 Funny story: Billy @ DIAKADI gave me some two amazing grass-fed steaks for Christmas, and challenged me to actually cook them, since I NEVER cook.  (Yes, it’s true, I’ve lost over 90 pounds since March and I hardly ever cook at home.  I eat out a lot, and simply make better choices off the menu than I used to, thanks to Eating Free!  I do keep food in the house, mostly healthy snacks and breakfasts, but food preparation for one can be a little depressing so I tend to eat a lot of meals out of the house, with friends.)  So anyway…I get these *beautiful* steaks home, I fire up the stove, turn on the overhead fan and go to town with cooking one of the steaks in my awesome grill pan, a gift from my old friend Tracy.  I do a great job, it looks beautiful…but my apartment is filling up with smoke, because apparently my kitchen fan sucks and the overall ventilation is poor, even with the windows open. (If I actually ever cooked, I would have known this sooner.)  So, in the middle of eating my delicious, juicy steak in my smoke-filled apartment, I make the bad decision to open the front door of my apartment to vent out the smoke into the hall.

I’m sure you can see where this is going….The building alarm is activated and our 18-unit building starts evacuating.  I go down to the street and start chatting with my neighbors, who, are really nice to me because they don’t know it was my cooking that caused us to all run out into the cold.  (Strangely, my unit’s own smoke alarm did not go off.)  The firemen arrive and I feel obligated to explain to the head fireman that it was my cooking that triggered the alarm.  He yells back to his team not to worry, that it was just “burned food.”  And I am all insulted.  I did NOT burn that steak!  So I yelled to the team of firemen, “It’s not burned, actually, it’s perfect!”  Hey, I dont’ want some black mark on my record with the city of San Francisco that says I can’t cook!

The lead fireman says he has to inspect my unit.  I’m thinking this will be a great opportunity to show him my flawless meat.  So he comes upstairs, sees that there clearly was no fire that I was trying to cover up, and then gets on the radio: “Nothing to worry about, just burned food in apartment seven.”  And now I’m REALLY annoyed, because my food was NOT burned.  So I yell into the radio with an eye-roll, almost singing, “It’s not burned, it’s perfect!”   Then I turned to the fireman and said, “I mean, just LOOK at it!”  And we looked down at it together.  “Hmmmm….” he said, with an approving head-wobble. “Seared.”  And then left.  I finished my steak, which was crazy delicious.  Prather Ranch Beef Ribeye, by the way.
Of course my apartment smelled like steak for days, which was both disgusting and amazing at the same time.
On the weight loss front: my weight loss slowed down during the holidays.  And by “the holidays” I mean the two months from Halloween through New Year’s, when food was coming at me from all sides!  In my office, there was the Halloween candy people kept buying at Walgreens and dumping into our candy bucket, the post-Halloween candy people stole from their kids and brought into the office, seasonal baked goods (pumpkin this, apple that) that employees or their spouses would bake and send to work.  Socially, there were all these celebratory happy hours and parties, plus Thanksgiving dinner, plus the big Christmas Eve group dinner at 2223 Market (alas, they closed for good over New Year’s) and my recent Christmas-week excursion to San Francisco’s hard-to-get-into Flour and Water restaurant, where they hand-make perhaps the best pasta I’ve ever eaten.
Yes, “the holidays” is one of our easiest excuses.  It’s so easy to blame “the holidays” on our lack of discipline, isn’t it?  Don’t blame yourself, blame hundreds or thousands of years of tradition!  Let’s be honest: I didn’t have to eat all that stuff, I was just “living a little” so often that it was basically “living a lot.”  And while I still lost weight in November and December, I averaged about 2.75 pounds of loss per month.  (Compare that to the 10.5 pounds per month I averaged between March and October.)

Like all the people who who use the world’s oldest excuse, I am planning to re-engage now that the holidays are over.  I’d wanted to reach one hundred pounds of weight loss by New Year’s Eve and that just didn’t happen.  But if I can get my act together, it could happen by the third week of January.  Stay tuned!