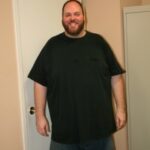 I made a comment in my blog entry last week that maybe I ate a little too “free” last weekend.  Well, apparently I didn’t fly off the handle as much as it might have felt at the time, because at my weigh-in this week I was down another 3 lbs.  So that’s 10lbs in three weeks.  As someone on my Facebook pointed out, that’s about half a pound per day.  I know I won’t keep this pace up forever, but for now, it feels nice to have so much success so early in the program.

I saw my doctor this week.  He was delighted that I’ve lost 10 lbs.  He’s been encouraging me to lose weight for many years.  But he always did it the wrong way.  He would say, “I want you to see this dietician, she’s had success with several of my patients.”  And I’d say, “Oh yeah?  What’s her philosophy?  How does the plan work?”  And he’d say happily: “Starvation!”  He can be sorta a weird guy, especially when he pats my head and comments on how soft my hair is, but he wasn’t kidding about the starvation.  About a year and a half ago, I went to meet this dietician that he’d told me about for years.  Turns out that the weight loss plan she administers is all about drinking chalk dust mixed with sawdust and the whole thing just looked horribly unappetizing.  Especially considering how much the diet food and services were going to cost!  I’m sorry, but it just doesn’t make sense to PAY to suffer.

So I took this opportunity to tell my doctor that his continuous recommendation that I see this woman about starving myself was of serious detriment because it made me scared about weight loss for quite some time.  I explained to him that I was losing weight without being hungry or necessarily deprived.  I explained to him that I could eat a ton of food as long as it was the right food, and I was basically doing so.  He listened, found the whole thing interesting, and asked me to send him the contact information for Sarah @ Eating Free so he might contact her about sending patients her way in the future.

He’s a good doctor, I just think his line of thinking on weight loss was seriously “old school.”

On Saturday I went down to San Jose and Santa Cruz with my best friend.  We wandered a museum in SJ, walked the SC boardwalk, and then strolled around downtown SC to find a place to have dinner.  It was a lot of walking, and by the time we settled on a place for dinner,  my feet/calves were really hurting. (Stay tuned: more on that foot/leg pain, and the related fix provided by Billy @ DIAKADI, in next week’s blog).  When we got there I was famished because since I started “Eating Free,” I normally have a snack between lunch and dinner, and today it just didn’t happen.  So upon arrival at this vegetarian diner (Saturn Cafe, I totally recommend it) I was clamoring for french fries and a milk shake.  The craving was strong, I could smell french fries, and I just wanted them badly.  There was this weird, Disneyesque, animated sequence in my head, french fries doing high dives into pools of ketchup, and milkshakes dancing with ethinicly stereotypical clocks and candle sticks while Angela Lansbury crooned in the background.  When I came to, my friend told me to suck it up, and I managed to resist ordering them.  When our healthier appetizer arrived, I realized that I really just needed food in general, not necessarily dancing fries and a singing milkshake.  In other words: as soon as I was eating something else, the craving was killed.

When our “needs” are strong, we have more “wants.”   Obviously there is a lesson here.  If you don’t act impulsively, the craving will subside.  But really another thing I have to keep in mind is that if I had eaten french fries or a milk shake it wouldn’t have been the end of the world, it just would have jacked up my numbers for the day and I’d have to compensate tomorrow and maybe the next day.

So I totally could have eaten that stuff…but man, on that particular day, it felt great not to.